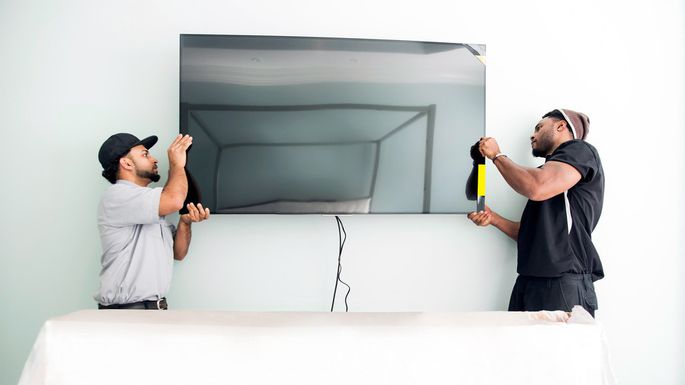 Having your television mounted on the wall of your house is a brilliant idea as it saves the space of your floor, besides making the screen visible from all parts of your room.

Things to consider before mounting

Before you put your TV up there, there are numerous things you ought to consider for perfect and safe viewing as well as the safety of the television. Here are some of them:

You have invested much into the acquisition of your TV, and the worst imaginable thing that can happen is to see it crumbling down due to poor mounting. To avoid that, you need to choose the appropriate mounting kit that will handle the weight of the television set. Besides, it is imperative for you to assess the structure of your wall to ensure that it can support the weight of your flat screen television.

The larger the display of your TV, the more the set’s weighs and the harder is its support. Although the majority of the people mount their televisions into wood studs, many of these TVs have exceptional anchors for metal, concrete and drywall studs, among others.

Don’t forget that anchors are supposed to support five times of the weight of the items you intend to put on the mount.  Proper mounting of a big-display flat-screen, for instance, a 60-inch is not a breeze, sometimes requiring the help of a professional installer.

Each TV requires a specific mounting bracket, depending on its respective screen size. There are some reliable applications that you can use to find the mounts that are appropriate for your TV. Alternatively, you can your TV can consult your TV manual or manufacturer for accurate information on the same.

You want to view your TV in a way that you won’t strain but rather comfortably. For that reason, consider mounting the set at the level of your eyes when you are seated. You are likely to experience on your neck when it is placed higher beyond your eye level.

Besides, when you mount the TV that high, you won’t be able to view pictures clearly. However, if you still want to mount it higher than your eye levels for particular reasons, it is advisable that you use a tilting wall mount so that you will be able to slant it down.

Ideally, the middle of your TV screen should be at eye level when you’re seated. Mounting it too high can result in neck strain. Plus, the picture will look its best when viewed as close to head-on as possible, rather than at an angle.

If you do decide to opt for higher placement, consider using a tilting wall mount so you can angle the TV down. You can check the user’s manual of your television for tips on the correct mounting height.

4. Will there be a screen glare?

You want to view explicit pictures on your television once it is mounted, right? Then you have to ensure that the wall area on which you intend to support it is free from the reflection of light. Sit in the area where you prefer watching your TV from and look at the mounting spot to establish if there’s a light reflection. If the reflection is present, check if there’s something you can do to avoid it, for instance closing of curtains or moving of your lamp.

In case the issue is still there despite the attempts to mitigate it then you should consider mounting the television on a different spot. Otherwise, you won’t enjoy clear viewing due to screen glare if you mount it on an area where light is reflecting unless you use a tilting wall mount to minimize the glare and it works.

Although a sleek TV looks alluring when mounted above a fireplace, the position is not the best. Besides, placing the television there is in many instances more convenient as compared to other areas of a house since many home builders run power and video cables through the spot.

However, it advisable to avoid mounting your TV above your fireplace not only because it is too high for proper television viewing but also because the heat and smoke produced by wood fire have negative impacts on the longevity of your television. Nevertheless, if height is not a concern, you can still mount the TV on your gas fireplace because such fireplaces disperse heat through special venting, hence pose no damage risks to your television.

Find out the location of ports on your television. Are they on the back side of the TV? If so, consider purchasing a wall mount with the capability of telescoping outward. The outward telescoping will enable you to reach the back of the TV better, especially when you are connecting additional devices.

Otherwise, if port accessibility is an issue, then you’ll be promoted to umount the television each time you want to plug in new devices, and this is something you don’t want, do you?

7. Do you have the right tools?

You’ll require numerous tools such as a stud, drill bit as well as a stud finder to have your TV supported on the wall. You’ll also need a drill bit with a size similar to that of the mount screws as well as a screwdriver bit. However, purchasing all these tools may be an expensive affair for you, and in such case, you’ll only need to rent them at your local home improvement store or ask help from a friend.

8. The position of the component spot

Perhaps, just like many other people, you have several appliances such as cable boxes and game consoles connected to your television. You need to ensure that the devices will be in proximity to the TV once it is mounted so that their cords can reach its output ports. You can either install a floating shelving unit or put a bookshelf (with a drilled hole in its back) beneath the TV.

You don’t want to see the power and A/V cables of your mounted TV and connected devices cluttered, do you? If your answer is ‘no’ then you have to come up with a plan on how you’ll hide the wires before you start to mount the television. Some of the options that you can go for the purpose include the use of paintable cable management raceways, running the wires behind your baseboard, the use of cord-hider and crown molding.

Alternatively, consider mounting additional devices directly at the back of the TV. Otherwise, cluttered wires put your electronic devices at risk of electric shock, in addition to compromising with the neatness of your house.

10. Certification of attachments and accessories

You need to use sturdy mounting accessories, and you can only ascertain their strength by checking if they are approved by a relevant and reputable independent laboratory such as  Underwriters Laboratories and ETL as well their respective manufacturers.

The procedure of mounting flat-screen TV

Once you have considered the above major ten things, and possibly others that we have not mentioned there, the next thing to do is the mounting of your flat-screen TV. Here’s is a brief guide on how you’ll mount it:

Locate the studs on your wall, if possible using an electronic stud finder or tap the areas you suspect the studs could be using your knuckles. A thin sound coming from a wall area upon tapping indicates the presence of a stud. On the other hand, a hollow sound signifies drywall.

Alternatively, you can locate studs by hammering where you suspect could be having studs. A nail won’t go in quickly in an area with a stud while its smooth penetration is an indication of drywall.

Once you locate an area with stud, mark it using a pencil and a level. The leveled marking helps you to mount your television evenly.

With its mounting holes aligned on top of the sturdy trial holes that you drilled previously, put your mounting bracket against the wall and screw the bolts into the holes. Ensure the mounting bracket is in proper level and try to confirm if it is strong enough to hold the weight of your TV.

Hang the TV on the bracket attached to your wall and make sure it is sturdy enough to support the weight of your television. Once you do that, connect the power cables to the power socket, switch the TV on and then enjoy your favorite show.

Having said that, we can now comfortably cross our fingers and leave the ball on your court. Just follow the above guide and start watching your perfectly installed flat screen TV.